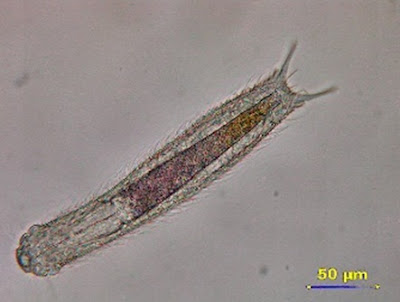 Rhabdolaiminae.  Cuticle with fine transverse striae.  Lateral fields absent.  Amphids small and rather inconspicuous.   Head flatly rounded, very lightly offset, without lips, papillae or setae.  Stoma simple, furnished with 3 minute denticles in the anterior part and followed by a long, tapering tube lined by 3 rod-like thickenings and surrounded by a forward extension of the oesophagus.  Latter almost cylindrical but narrowing to a short isthmus and swelling out  into a terminal, pyriform, muscular bulb containing a valve apparatus.  Tail in both sexes long and tapering, ending in a long terminal duct through which the caudal glands open.  Vulva nearly equatorial,  gonads paired and opposed.  Spicules stout and rather broad anteriorly. Gubenaculum absent or represented by 2 local thickenings in the floor of the cloaca.  No papillae in caudal region of either sex.  Males are rare.

Morphology Rhabdolaimus
As Same as Nematodes,Rhabdolaimus are slender worms: typically approximately 5 to 100 µm thick, and at least but less than 2.5mm long. The smallest nematodes are microscopic, while free-living species can reach as much as, and some parasitic species are larger still, reaching over a meter in length. The body is often ornamented with ridges, rings, bristles, or other distinctive structures.

At the anterior end of the animal, the nerves branch from a dense, circular nerve ring surrounding the pharynx, and serving as the brain. Smaller nerves run forward from the ring to supply the sensory organs of the head. Some nematodes, such as Heterorhabditis spp., undergo a process called endotokia matricida: intrauterine birth causing maternal death. Some nematodes are hermaphroditic, and keep their self-fertilized eggs inside the uterus until they hatch. The juvenile nematodes will then ingest the parent nematode. This process is significantly promoted in environments with a low food supply.

Reproduction Rhabdolaimus
Most nematode species are dioecious, with separate male and female individuals. Both sexes possess one or two tubular gonads. In males, the sperm are produced at the end of the gonad, and migrate along its length as they mature. The testes each open into a relatively wide sperm duct and then into a glandular and muscular ejaculatory duct associated with the cloaca. In females, the ovaries each open into an oviduct and then a glandular uterus. The uteri both open into a common vagina, usually located in the middle of the ventral surface.

Reproduction is usually sexual. Males are usually smaller than females (often much smaller) and often have a characteristically bent tail for holding the female. During copulation, one or more chitinized spicules move out of the cloaca and are inserted into the genital pore of the female. Amoeboid sperm crawl along the spicule into the female worm. Nematode sperm is thought to be the only eukaryotic cell without the globular protein G-actin.

Eggs may be embryonated or unembryonated when passed by the female, meaning their fertilized eggs may not yet be developed. A few species are known to be ovoviviparous. The eggs are protected by an outer shell, secreted by the uterus. In free-living roundworms, the eggs hatch into larvae, which appear essentially identical to the adults, except for an underdeveloped reproductive system; in parasitic roundworms, the life cycle is often much more complicated.

Nematodes as a whole possess a wide range of modes of reproduction. Some nematodes, such as Heterorhabditis spp., undergo a process called endotokia matricida: intrauterine birth causing maternal death. Some nematodes are hermaphroditic, and keep their self-fertilized eggs inside the uterus until they hatch. The juvenile nematodes will then ingest the parent nematode. This process is significantly promoted in environments with a low food supply.

The nematode model species Caenorhabditis elegans and C. briggsae exhibit androdioecy, which is very rare among animals. The single genus Meloidogyne (root-knot nematodes) exhibit a range of reproductive modes, including sexual reproduction, facultative sexuality (in which most, but not all, generations reproduce asexually), and both meiotic and mitotic parthenogenesis.

The genus Mesorhabditis exhibits an unusual form of parthenogenesis, in which sperm-producing males copulate with females, but the sperm do not fuse with the ovum. Contact with the sperm is essential for the ovum to begin dividing, but because there is no fusion of the cells, the male contributes no genetic material to the offspring, which are essentially clones of the female.

Digestive System Rhabdolaimus
The oral cavity is lined with cuticle, which is often strengthened with ridges or other structures, and, especially in carnivorous species, may bear a number of teeth. The mouth often includes a sharp stylet, which the animal can thrust into its prey. In some species, the stylet is hollow, and can be used to suck liquids from plants or animals.

The oral cavity opens into a muscular, sucking pharynx, also lined with cuticle. Digestive glands are found in this region of the gut, producing enzymes that start to break down the food. In stylet-bearing species, these may even be injected into the prey.

There is no stomach, with the pharynx connecting directly to a muscleless intestine that forms the main length of the gut. This produces further enzymes, and also absorbs nutrients through its single cell thick lining. The last portion of the intestine is lined by cuticle, forming a rectum, which expels waste through the anus just below and in front of the tip of the tail. Movement of food through the digestive system is the result of body movements of the worm. The intestine has valves or sphincters at either end to help control the movement of food through the body
Free-living species Rhabdolaimus
In free-living species, development usually consists of four molts of the cuticle during growth. Different species feed on materials as varied as algae, fungi, small animals, fecal matter, dead organisms and living tissues. Free-living marine nematodes are important and abundant members of the meiobenthos. They play an important role in the decomposition process, aid in recycling of nutrients in marine environments, and are sensitive to changes in the environment caused by pollution. One roundworm of note, Caenorhabditis elegans, lives in the soil and has found much use as a model organism. C. elegans has had its entire genome sequenced, as well as the developmental fate of every cell determined, and every neuron mapped.

Behavior Rhabdolaimus
Rhabdolaimus lives in Water,some of them can be found in the deepest place on earth and they live as scavanger.They can live as a part of ecosystem.They role as a detritus.

The relationships of the nematodes and their close relatives among the protostomian Metazoa are unresolved. Traditionally, they were held to be a lineage of their own but in the 1990s, they were proposed to form the group Ecdysozoa together with moulting animals, such as arthropods. The identity of the closest living relatives of the Nematoda has always been considered to be well resolved. Morphological characters and molecular phylogenies agree with placement of the roundworms as a sister taxon to the parasitic horsehair worms (Nematomorpha); together they make up the Nematoida. Together with the Scalidophora (formerly Cephalorhyncha), the Nematoida form the Introverta. It is entirely unclear whether the Introverta are, in turn, the closest living relatives of the enigmatic Gastrotricha; if so, they are considered a clade Cycloneuralia, but much disagreement occurs both between and among the available morphological and molecular data. The Cycloneuralia or the Introvert depending on the validity of the former are often ranked as a superphylum