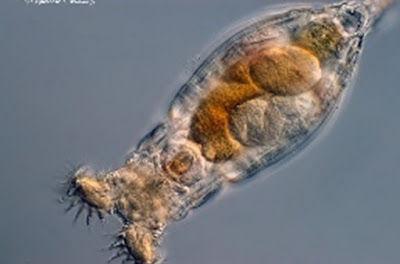 Philodina is one of the first rotifers to have been described in detail. Here is an early account of its feeding behaviour given by Henry Baker in a letter to the president of the Royal Society in 1745:

A Couple of Circular Bodies, armed with small Teeth like those of the Balance-wheel of a Watch, appear projecting forwards beyond the Head, and extending sideways somewhat wider than the Diameter thereof. They have very much the Similitude of Wheels, and seem to turn round with a considerable Degree of Velocity, by which means a pretty rapid Current of Water is brought from a great distance to the very Mouth of the Creature, who is thereby supplied with very many little Animalcules and various Particles of Matter that the Waters are furnished with. 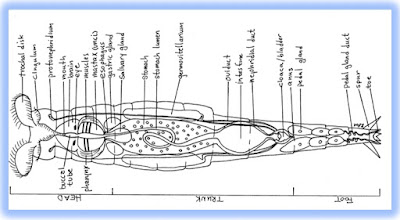 External Anatomy Philodina
Place a drop of Protoslo on a slide, add a tiny bit of debris from the bottom of a culture jar of Philodina, and mix.  Apply a coverslip equipped with wax feet (see Techniques chapter) on two adjacent corners and press it into the liquid so the animals are provided with a thin film of water but are not squeezed.   Use the scanning lens of the compound microscope to find a clump of debris with rotifers attached.   Alternate between 100 and 400X for the rest of your observations. Most specimens will move occasionally, giving you views from several angles but you will need to study several specimens to see everything.

Rotifers are active animals and are difficult to observe when swimming.   Some of your specimens will probably be attached to debris or the glass and these will be the easier to observe.  Find a quiet, attached specimen and observe it. If it swims away during the observation be prepared to follow it or find another. This will probably happen several times.

Lorica Philodina
The body is elongate, widest in the middle, and strongly tapered posteriorly. It is composed of a short anterior head, long, thick, middle trunk, and short, narrow, posterior foot .

The body is enclosed in a well-developed intraepidermal lorica, produced by and contained within the cytoplasm of the syncytial epidermis.   The many longitudinal and circular muscles in the body wall are not arranged in distinct layers.

The body cavity is a large, spacious hemocoel (= pseudocoel) filled with fluid and cells.   It is derived from the blastocoel and lacks a mesothelium.   Neither the muscles nor hemocoel are visible in wholemounts.

The body is encircled by about 16 circumferential rings, or annuli, and consequently appears to be segmented but the divisions are confined to the lorica (which is intraepidermal) and are superficial .The annuli are of different diameters and allow the body to shorten by telescoping.   If you are observing a living specimen, you will see this occur.

The smaller annuli of the head and foot telescope into the larger ones of the trunk so that the head and foot can be completely retracted into the trunk.   Telescoping is accomplished by contraction longitudinal muscles, which have their origins and insertions on the inner surface of the epidermis (lorica).

Head Philodina
The head consists of the anterior six annuli but they are difficult to count . The head narrows posteriorly to become a short neck which joins the wider trunk. At its apparent anterior end the head bears a conspicuous and characteristic array of cilia known as the corona.The corona is completely retractable into the trunk and is not visible when retracted.   Find an animal with its corona expanded and study it. Swimming specimens always have the corona expanded but they are difficult to observe.

The pattern formed by the cilia of the corona varies with taxon but that of Philodina is composed of two ciliary rings around the anterior body .The anterior ring, known as the trochus, is divided into right and left circles of cilia, each of which is known as a trochal disk.When beating, the disks resemble rotating wheels.

The second ciliary ring of the corona is the cingulum, which encircles the body just posterior to the trochus and mouth. The trochus and cingulum may be difficult to distinguish from each other. The trochus is composed of large cilia, often organized into membranelles, whereas the cilia of the cingulum are much smaller.

The corona generates the feeding and locomotory current.   The trochal disks are the source of the older common name "wheel animacules" and the scientific name "Rotifera". Watch the trochal disks and note the synchronized waves of ciliary motion which move in circles around each wheel. When the animal is attached and stationary, the cilia draw a feeding current of water and suspended particles to the mouth, which is located between the two trochal disks.   When the rotifer releases its hold on the substratum, the beating of the cilia pull it rapidly through the water.

Posterior to the corona the dorsal midline of the head bears a slender, sensory dorsal antenna .It is visible in side view but undetectable in ventral and dorsal views.   The antenna is always visible if the animal presents its side view and is much easier to see than the rostrum.   It is longer and thinner than the rostrum.   The large retrocerebral apparatus in the head open dorsally. Its probably secretes mucus but is difficult to see.

Trunk Philodina
The trunk is the wide, long, middle region of the body plus the first two annuli of the tapered posterior body . It begins with the first wide annulus posterior to the narrower head and extends posteriorly to the anus.The trunk consists of six annuli with the anus is on the sixth.   Most of the viscera are contained in the hemocoel of the trunk. The annuli of the head and foot telescope into the trunk to shorten the animal.

Foot Philodina
The foot extends posteriorly from the trunk and is the region of the body posterior to the anus.  It tapers posteriorly and consists of four annuli.The posterior annulus of the foot bears a pair of dorsal spurs and four small, sticky toes .The spurs are always evident and conspicuous but the toes are usually hard to find. The spurs are dorsolateral and the toes posterior to them.   Pedal glands in the foot secrete adhesive, which is released from the tips of the toes and used to stick temporarily to the substratum.

Most of the time the toes are either retracted, or attached to the glass of the slide or coverslip, or oriented in such a way that you cannot see them clearly. They are best glimpsed during the brief intervals when the animal repositions its foot .In doing this the rotifer releases the toes, extends them fully, reattaches them, and then partly retracts them. Watch for them during the brief moment when they are reextended.

The animal uses its toes to attach temporarily to the substratum. With low power watch a moving rotifer use its toes to attach to the glass or debris.
Function Philodina
Terrestrial bdelloids undergo cryptobiosis and withstand extended periods of desiccation and return to metabolic activity when wetted.   This ability makes it possible for them to inhabit bryophytes (mosses) in terrestrial habitats that are only periodically wet.   During wet conditions the rotifers inhabit the thin film of water on the surface of the moss.   Here they feed and complete the parthenogenetic life cycle.   The well developed foot and toes maintains contact with the moss substratum.   They are elongate and vermiform to facilitate maneuvering in the tiny spaces among the moss "leaves".

Take a small sample of moss, perhaps collected from a nearby tree, and place it in an 8-cm culture dish and completely cover it with spring water.   Deionized water or lake water is acceptable but do not use tap water.   Examine the submerged moss with the highest power of the dissecting microscope for signs of activity.   You probably will not see anything.   Set the dish aside for 15-30 minutes and look once more at the moss with the dissecting microscope. This time you should see active bdelloid rotifers.

Using 40X find and watch a rotifer for a few minutes. Observe the way it uses the toes at the posterior end of the foot to attach to and move over the substratum . The rotifer may move in a leech-like looping manner in which it alternately attaches and releases the posterior and anterior ends.

Dishes that have been standing for several days may have rotifers concentrated on surface tension which they use as a substratum.   These rotifers are especially easy to observe as they move leech-like over the under side of the surface tension.

If desired, a wetmount may be prepared and the rotifers studied with the compound microscope.

Reproduction Philodina
Like other obligate asexuals, bdelloid rotifers are expected to suffer from degradation of their genomes through processes including the accumulation of deleterious mutations. However, sequence-based analyses in this regard remain inconclusive. Instead of looking for historical footprints of mutations in these ancient asexuals, we directly examined the susceptibility and ability to repair point mutations by the bdelloid Philodina roseola by inducing cyclobutane-pyrimidine dimers (CPDs) via exposure to UVB radiation (280-320 nm). For comparison, we performed analogous experiments with the facultative asexual monogonont rotifer Brachionus rubens. Different strategies were found for the two species. Philodina roseola appeared to shield itself from CPD induction through uncharacterized UV-absorbing compounds and, except for the genome reconstruction that occurs after desiccation, was largely unable to repair UVB-induced damage. By contrast, B. rubens was more susceptible to UVB irradiation, but could repair all induced damage in ~2 h. In addition, whereas UV irradiation had a significant negative impact on the reproductive output of P. roseola, and especially so after desiccation, that of B. rubens was unaffected. Although the strategy of P. roseola might suffice under natural conditions where UVB irradiation is less intense, the lack of any immediate CPD repair mechanisms in this species remains perplexing. It remains to be investigated how typical these results are for bdelloids as a group and therefore how reliant these animals are on desiccation-dependent genome repair to correct potential DNA damage given their obligate asexual lifestyle.