1. the locally found members of the subgenus Sinobosmina (family Bosminidae), namely Bosmina (Sinobosmina) freyi and Bosmina (Sinobosmina) liederi, were referred to in the past collectively as Bosmina longirostris. A paper by De Melo and Hebert (1994) proved that this latter species does not exist within Canada and is only found in the extreme South-Western United States. Many researchers

3. If an identification is still uncertain after following these steps, it is always best to adopt a more general designation rather than take a “guess”. For example, the taxonomy of Bosmina is notoriously complicated by the elements mentioned in the introduction to this Guide. Very fine distinctions separate members of the 5 species found within the Sudbury Region. Therefore, if in doubt, assign a member of this family to the proper genus (i.e. Eubosmina or Bosmina) rather than attempting a tentative species designation.

Taxa listed in the EMRB zooplankton database sorted by genus, updating taxonomic distinction (by Robert Girard - DESC) (Note that changes are highlighted in bold italics and that shaded species are those found within the Sudbury Region)

Details for this group will not be as extensive as for Daphnia. A brief visual summary is provided here in order to clarify some of the confusion over the specific taxonomy. As was previously noted, the subgenus Sinobosmina was collectively referred to as Bosmina longirostris in the past (De Melo and Hebert, 1994) and has recently been changed to subgenus Bosmina (Taylor et al., 2002). Several researchers continue to identify specimens found within the Sudbury Region as Bosmina longirostris, despite genetic findings that this species does not occur anywhere in Canada (De Melo and Hebert, 1994). 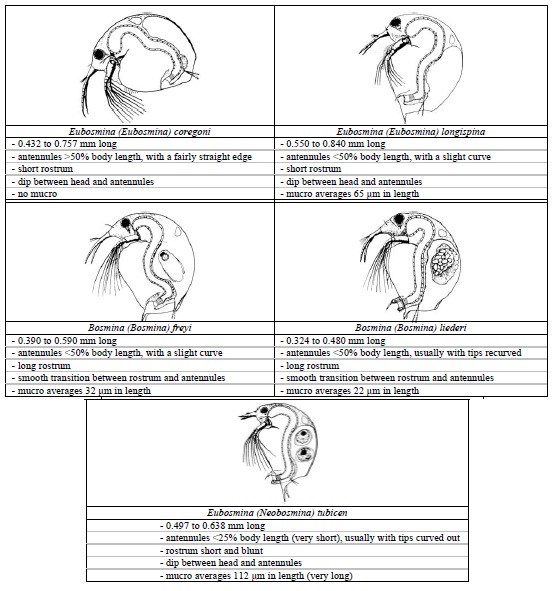